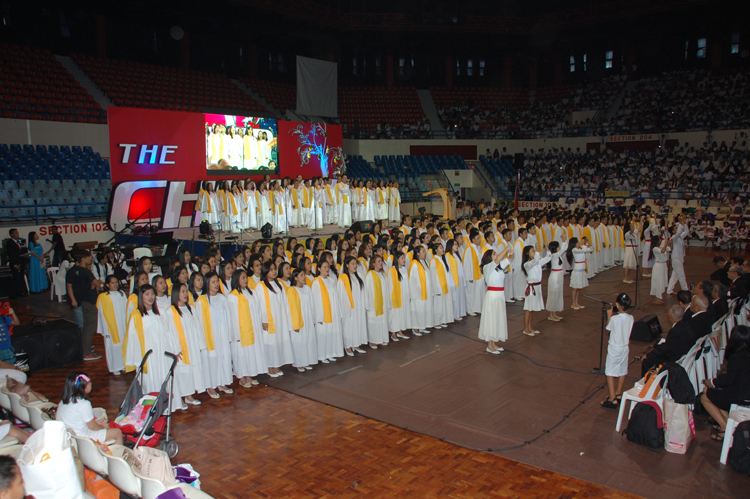 KAMPAY AGILA is a missionary   effort of the Most Holy Church of God in Christ Jesus in bringing the Gospel of Jesus Christ to the world. The first batch for this year, consisting of thirteen teams of missionaries was sent out in January to different places and came back after six months with success in bringing more than a thousand converted souls to the Fold. They are the new generation of Joshua and Caleb who were sent to Canaan to see whether the Promised Land “does flow with milk and honey”. They brought along fruits – a branch with a single cluster of grapes, pomegranates and figs. The newly baptized souls are the fruits that are pleasant to the Lord.   Another set of KAMPAY-AGILA is set to go to Tuguegarao, Marinduque, the Visayas and Mindanao to step-up our missionary activities and to augment our current teams in the region. With the help of God, we will reap a much greater harvest.

The Lord led us to succeed in our mission not only here in the Philippines. The Lord added to the Church new members to the Church in Canada and to the Church in the USA. We have the first fruits of faithful in Dubai and in Australia as well. Our success is attained due to the united efforts of the members of the Most Holy Church all over the world in support of the Mission and the guidance and empowerment of the Holy Spirit.

We have encountered genuine believers and good listeners. These experiences are similar to the ones encountered by the brethren who belong to the early Church. A case in point:

Philip was sent by God through an angel who instructed him to go to Gaza from Jerusalem. So he went and met an Ethiopian Eunuch, who was then riding a chariot and reading from the Book of Isaiah where the prophecy regarding Jesus Christ is written. The man was of great authority, in charge of Queen Candace’s treasure. He was a rich and well educated man of the Queen. He came to Jerusalem to worship as he was a proselyte, a gentile convert to Judaism.

He asked Philip to enlighten him about the scriptures. Philip “opened his mouth and preached about Jesus”. Philip did not just have a casual talk with the Eunuch but in fact, evangelized him. He told him everything he knew about Jesus Christ. He preached that Jesus is God who manifested himself in the flesh to save mankind. He testified about the love of Jesus, his compassion towards all men who suffer and oppressed. He also testified with all conviction how Jesus healed the sick, fed the hungry, deliver men from evil spirit. He also talked about the miracles Jesus performed during His ministry. He preached to the Ethiopian about the Church which was founded by Jesus Christ, where the Apostles were called and was propagated by them. He told him that he should mend his ways, accept the Gospel, submit to God’s will, repent and be baptized in the name of Jesus and become a member of His Church.

“Look, here is water. Why shouldn’t I be baptized?” And the Ethiopian Eunuch was baptized in the Church and received the salvation of his soul after he professed His faith in the Lord Jesus Christ. He was converted from being an adherent of Judaism to becoming a Disciple of Christ.

In another case, Apostle Paul was accused of inciting rebellion among the Jews. He was defending himself to the

Roman Governor of Judea named Felix. It was an opportunity for the Apostle Paul to witness about “The Way,” which is Church. He declared his Faith in God and his conviction to serve only Him. Furthermore, he witnessed to the Governor about the “Resurrection from the dead” and his great hope to be raised from the dead just like Jesus which is the reason why he faithfully follow Jesus path of righteousness and love.

“Go away for now; when I have a convenient time, I will call for you.” This was Governor Felix’s reply when he did not find fault against Apostle Paul and especially because he was terrified by the discourse delivered by the Apostle regarding the Resurrection. He became interested in Apostle Paul’s preaching. In fact he called on the Apostle several times to learn more about the Gospel. However, Governor Felix was not baptized in the Church.

Most people want to do things at their most convenient times. Those times never come. There may not be a next time. We do not know if we will still live tomorrow. There is no perfect time than now specially regarding our salvation. We have to seize the moment. Today is the day of your salvation. Now is the opportune time to surrender yourself to Jesus Christ our Lord. Not later nor tomorrow but NOW.